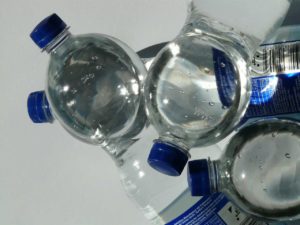 Americans spend more than $10,000 a minute for something that is readily available for free: water. You’re spending more per gallon than you would on gasoline for this thing that you can get out of the tap virtually for free. Why do we shell out from 240 to over 10,000 times more per gallon for bottled water than we do for tap water?

Perhaps we’ve given in to the marketing and advertising hype that bottled water comes from pristine springs and lakes. Or maybe because of the taste or the perception that bottled water is better regulated, safer or purer than tap water. However, according to government and industry estimates, about one-fourth of bottled water is bottled tap water (sometimes, but not always, with additional treatment).

A study found that tap water is often better regulated than bottled water and has to meet more stringent standards at both the federal and local levels. Cities must test their water for chemical contaminants at least once a quarter, but bottlers must only test annually. While the US Food and Drug Administration does have bottled water standards in place, these are not nearly as strict as those for tap water. In addition, according to the NRDC, 60 to 70 percent of the bottle water sold in the US is exempt from FDA’s rules because these regulations do not apply to water packaged and sold within the same state. The International Bottled Water Association (IBWA) argues, however, that FDA regulation covers all bottled water because the components involved–packaging, ingredients and industrial facilities–must comply. In any case, among the thousand bottles tested by the NRDC, about one-fifth contained chemicals such as toluene, xylene, or styrene, known or possible carcinogens and neurotoxins.

One of the more surprising findings from the study is that a city’s tap water cannot have any E. coli or fecal coliform bacteria, while bottled water is allowed a certain amount of these bacteria. In addition, most cities’ tap water must be tested for Cryptosporidium or Giardia, common water pathogens that can cause intestinal problems, including diarrhea. In contrast, bottled water companies are not required to conduct these tests. City tap water must also be filtered and disinfected, but there are no federal filtration or disinfection requirements for bottled water (these requirements are delegated at the state level, but many states do not have meaningful programs in place). Tap water must also meet standards for toxic chemicals such as phthalates (hormone disruptors that can leach from some plastics), but the bottled water industry is exempt from these regulations.

Lastly, many people reuse disposable PETE plastic bottles, but recent research at the University of Idaho shows such bottles may leach di(2-ethylhexyl) adipate (DEHA), a plasticizer considered a probable carcinogen and hormone disruptor. In any event, reused water bottles also make good breeding grounds for bacteria since thorough cleaning is difficult, as confirmed in a study published in the Canadian Journal of Public Health in November 2002.

Usually, water is bottled in plastic packaging. Plastics are made from petroleum, so every time you buy a plastic drinking bottle, you are also using some of the world’s limited supply of oil, a non-renewable resource. The plastic bottle produced in the U.S. for bottled water requires millions of barrels of crude oil annually.

Even though plastic drinking bottles are recyclable, according to National Geographic Kids Americans only recycle one out of every six plastic bottles, so most end up in landfills or as litter in our streets and parks. The World Wildlife Fund estimates that about 1.5 million tons of plastic are used worldwide to make water bottles and according to the Environmental Protection Agency, plastics are their biggest concern when it comes to harming our waters and the environment

When you throw away a plastic drinking bottle, it will sit in a landfill for hundreds of years without decomposing.  The plastic manufacturing process is also associated with toxic byproducts, such as styrene and benzene, which are released into the air and cause not only pollution but respiratory problems and may cause cancers as well.

Obtaining water from an underground pipe is more energy efficient and uses far fewer natural resources than bottled water because of the transportation of bottles in trucks across the country or by ships around the globe. Besides consuming non-renewable natural resources, such as petroleum, their transport also contributes to pollution, noise and overcrowded highways and streets.

By choosing to drink purified tap water, we can conserve this valuable resource and keep the plastic used for bottled water out of our landfills and protect the environment.

This site uses Akismet to reduce spam. Learn how your comment data is processed.